If you are, like me, surrounded by an air of elitism and delusions of intellectual grandeur when it comes to music, and thus prefer the more unknown musical releases, you will frequently have to resort to obscure, possibly tax-evading mail order websites, as they are often the only ones to have what you’re looking for (unless if you’re an iTunes faggot, maybe). Due to the inevitably considerable shipping cost, it is better to buy everything you’re going to need for the next couple of months than to place orders sporadically. At times, however, it is difficult to find stuff you really want to have, and in these situations, adding some cheap CDs/vinyls/tapes to your virtual shopping cart more or less randomly can sometimes pay off.

Theosophy, the second full-length album by the Greek black metal band Gauntlet’s Sword, owes its spot in my – admittedly rather impressive – music collection to this semi-arbitrary selection procedure. The CD had already come to my attention a few times when I browsed through the catalogue of online mail order and record label Those Opposed (which, by the bye, is highly recommended) because of the utterly bizarre cover art that depicted what can best be described as a swan with a human body – or a human with a swan’s head, if you will. So when I saw that the CD was on sale for a mere 5 euros while sorting out one of my subsequent orders, I couldn’t resist the temptation of adding this strange object to my collection. Someone who puts a swanman on the front cover of his album should be a decent enough chap, after all.

In all honesty, I had no real notion of what genre Gauntlet’s Sword even played in when I ordered Theosophy. The rather typical logo more or less revealed the black metal nature of the band, but within this genre there’s still an incredibly wide array of different styles, not to mention a huge variation in quality. After thorough empiric research (metal-archives), Gauntlet’s Sword turned out to be a Greek black metal band led by an obviously cheerful man who goes by the alias of ‘Pain’. Pain also happens to be a multi-instrumentalist, limiting his need for additional personnel to session drummers. Theosophy is Gauntlet’s Sword’s (this is the part where your brain explodes) second and, as it stands, latest full-length. The release proves that, despite the inherent lack of consistency in the music, Gauntlet’s Sword has some potential.

Lycieus (Traveller East of the Sun, West of the Moon), the album’s opening track, already reveals a few of the strengths and weaknesses of this release. Rhythmically, the songs hold their own, offering many breaks and shifts in tempo. What drags this release down a bit, however, is a rather flat production that mainly affects the vocals and the lead guitar. The singing in particular has a kind of lo-fi, almost Filosofem-like touch that occasionally gives the melodic and varied compositions an unwanted messy feel. The drums, moreover, come across as uninspired despite their solid execution (by Naer Matharon’s Warhead), and don’t do justice to the good string work.

Honestly, this is a great photograph.

With all of these points combined, it must be said that the first half of the album is not wholly unlikable. The melancholic atmosphere of these songs, as well as their considerable variation in rhythm and the musical competence of Pain, make them very listenable. Even the fourth song, the somewhat odd and eerie ambient track A Smile, adds to the album’s strength. This makes it all the more lamentable that things start going downhill on the second half of the album, as Pain switches to a more aggressive approach on these tracks, a method that doesn’t really benefit the atmosphere of the album (which was convincing enough up until this point) due to the abundance seemingly random, near death metal-like riffs. The musicianship of both Pain and Warhead make these songs somewhat bearable, although it is still painful to observe the potential of this album being marred by a lack of creativity on the composer’s behalf, turning the entire ordeal into a rather standard exercise of black metal more than anything.

Another problematic aspect is found in the lyrics. They, too, have some potential, as they are inspired by Greek mythology, which is surprisingly uncommon among Greek bands, which, for whatever reason, often prefer to sing about superficial satanism and Norse/German mythology instead of their own cultural heritage. Pain has thus chosen an interesting enough theme for his Theosophy album, bar the lame attempt at NSBM in the last song. The lyrics, however, all have something in common which drags them down considerably: they’re in English. And judging by the bizarre choice of words and the heavy accent, frontman Pain seems to not yet have mastered the English language completely. The painful (though comical) result can be observed in lines such as “The Cock will linger to wake up” and “By the dark link, I did see number two”. Bluntly put, the lyrics should have simply been written in Greek. Granted, such an approach would have affected the accessibility, but since when was underground black metal even supposed to be accessible, anyway? Adding to that, authenticity is a very important aspect of this genre, and the incorporation of obscure local cultural elements can truly benefit the music. Going on to sing in a broken version of the lingua franca of the modern world, however, often destroys most, if not all of this magic, as the latter is supposed to evoke an ancient, near primordial vibe that just doesn’t gel all that well with the symptoms of a globalising world. It causes the same disillusion that one experiences when seeing telephone cables whilst walking through a forest. Apart from that, I just don’t see why many ethnic nationalists (a category into which Pain easily falls judging by the lyrics to the last track) often obsessively try to shield their culture from globalisation and basically anything that finds its origin as little as 1 centimeter behind the national borders, but just as easily abandon what is perhaps the most basic of all cultural traits – the mother tongue – whenever there’s an album to be recorded. That’s not a very consistent attitude, to say the least. 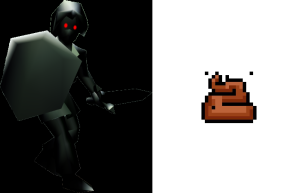 “By the dark link, I did see number two.” Something like this?

The entire problem of Theosophy is, in fact, that it lacks consistency: some songs are properly paced and have a strong atmosphere, while others seem to consist of arbitrary riffs that have little to no interconnectivity; the guitar and bass riffs are very solid, yet the vocals and drums lack any form of creativity and often succeed in dragging the entire listening experience down considerably; the lyrics focus on Greek mythology, yet are delivered in broken English. Et cetera. The release as a whole badly lacks coherency, and as such, Theosophy is not a very good album. Contrarily, the CD does contain some very worthwhile songs, with Pain regularly excelling in playing guitars and bass. Because of that, I did find the purchase worthwhile in the end, if only because the swanman on the front cover compensates for a lot of damage.