The music featured on this here lovely webpage will mostly be metal, but occasionally other genres, such as ambient, electronica, or rock, may also get their fifteen minutes of fame (or shame). I will near exclusively discuss underground music, however. After all, there are plenty of other websites and magazines out there that tell you exactly what you should think about the latest big releases. Apart from entertaining myself, the main goal of this website is to shed some light on bands that live mainly by word-to-mouth. I don’t rule out the possibility, though, that I will occasionally talk about bigger releases, if only to view them from a different angle (as music critics have the annoying tendency to ape each other).

The CDs I will discuss can be both old and new. Ideally, music is timeless and even after many years of listening to that old classic, you can still discover new things that you simply hadn’t noticed before. Adding to that, I buy all of my music and I don’t download, as to me an album is more than a few arbitrary files on my PC, and I don’t think I have the right to listen to an artist’s hard work without any form of compensation (and subsequently bash it, if necessary). Is it not strange, after all, to decide whether or not an album is worth the purchase if you have not even spent any money on it yourself? (Not that my reviews should be view as mere buyer’s guides, though.)

My reviews are exactly what I think reviews should be: critical analyses of albums, EPs, music DVDs, etc. I’m not going to do checklist reviews, talking about an album one song at a time, as this near inevitably leads to pretentious descriptions of something that cannot or at least should not be described. Moreover, an album should be viewed and judged as one work, or ‘product’, to put it American. If you are going to judge a CD as if it were some kind of high school essay and deduct points everytime the vocalist fails to hit a note, you are going to miss the point by a mile. An album is more than the sum of its parts (or less, in tragic cases).

By the bye, the reviews do not include scores because this also leads to the high school method of criticism. How would it even be possible to summarise a carefully constructed analysis of 1 or 2 pages with one sterile number? Not gonna happen.

Nearly all of my articles are originally written in Dutch. You are currently viewing the English equivalent of the blog, which contains translations of some of these reviews to this sterile, overused language, but the Dutch page will always be priority #1. Later, sections in other languages may be added, such as Spanish or even German, but this is something reserved for the (distant) future. 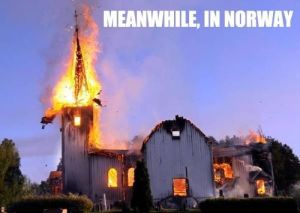