After all the long-winded analyses we came up with for the impending magazine, it is nice to have a bit of a breather with shorter reviews. To add to the joy, we return to familiar territory: the hexagonic home country of such class acts as Sühnopfer, Peste Noire and Charles Aznavour. However, across the four reviews below, all penned by MDL, we explore some newer, lesser-known releases. Oh, and there is more to come. Which also happens to be what Mr. Aznavour said when I told him I had a frog in my throat. 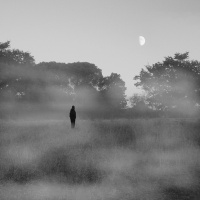 Seemingly from nowhere, this French one-person entity emerged on the Distant Voices roster in 2013. A split with label mates Arbre (deliciously titled Brouillarbre) has just been released on cassette, but that particular release shall be covered in the subsequent review, with the current blurb focusing on the self-titled début instead. Brouillard (meaning ‘fog’ in French) constructs three interlaced songs of hefty lengths, weaving driving drums, swirling vocals, both walls of guitar and ambient acoustic interludes with field recordings of drenched landscapes, sampled quotes (e.g. “So here we are in a beautiful dead end, how do we find a way out of this impasse?”) and an oneronic atmosphere of moist mists, dreamlike reflections, and solitude. It shares some of the moist sensations of Velvet Cacoon’s work, the existentialist and distant sounds of Trist (German, not Czech) and the monomaniacal focus on weather of Paysage d’Hiver. However, where Wintherr opts for a more reserved approach (call it Swiss sense) by aiming to reflect the iciness of landscape in (lo-fi) crystalline guitar lines and acoustics, Brouillard creates an altogether hazier sound of swirling fog, greyed and drenched fields, wavering melodies and a general feeling of unease and disorientation. The songs (pragmatically titled I, II & III) whisper and bleed into each other, constructing a single listening experience that alternates between the furious and the reflective; soaring leads lay out hypnotic melodies which rise and fall out of the greying mists formed from ferocious drums and backing guitars, keys mixed low and unearthly vocals. Brouillard shares a little of its form with Darkspace, although the two are very much distinct entities. Distant Voices has collaborated with the band to form some exquisite packaging, combining tracing paper, photography and a superb eye for aesthetics, further emphasising the blend of dream and dirge, fog and fancy, mist and the mind’s eye. In short, this is an absolute gem of an album; one which is fast running out in the Distant Voices emporium and well worth getting one’s hands on. Don’t tarry, immerse yourself in the wet winds and wild mists of Brouillard’s introspective soundscape. It’s albums like this which make the whole business worthwhile. |MDL 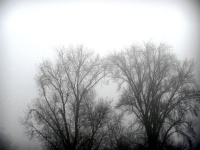 As mentioned above, this split sees two bands from the Distant Voices label contributing a terrifically long song each (around the 24-minute mark) on a single, highly limited cassette (49 copies in total). As you might expect, a foggy shroud of atmosphere envelops both pieces without blending to two bands into a single unit, although both employ an extensive field recordings of rain and winds upon the moors to set the tone and act as foundations for each song. Arbre’s offering (XII) relies on shifting arpeggios which float around and underneath a mixture of choral voices, scorching shrieks, guitar walls and calmer ambient interludes. Arbre has a very personal yet epic sound, as if you were privy to the anguish of the artist amidst a storm, the elements raging and subsiding with the currents of air, with their composition ending on an extended reflection built on guitar picking and whistling winds. Weaving together melodies from the spine of plucked chords, Arbre take an occasionally furious and at other times languid portrayal of the dripping nature around them. Brouillard’s part of the split (Brouillard) follows on from their début but takes the successes of that album and amplifies them into their most cohesive song-writing yet. A muddier mix than Arbre’s piece, Brouillard effectively conjures a dank mist over the listener’s brain, with thickly drummed dirges which ooze out from the tape at a pace initially creating a sense of urgency rather than reflection; relentlessness rather than contemplation. Through the slabs of chord however, melodies emerge like shafts of sun through the fog, and arpeggios also shimmer in the calm. Towards the end one finds a chasm of ambience which you will gladly fall into before being torn out by tremolos and breathless drumming. Both Arbre and Brouillard make use of pauses in the music, allowing the listener to catch their breath and look about them; they are masters of their craft, and I look forward to hearing more from both them in the future. Who wants summer, anyway? Autumn and winter, bearers of fog and frost, are far more inspiring. Get over to Distant Voices Productions or France d’Oïl Productions to secure a copy of this split. There are few remaining and by now you should trust my sound judgement in these things, dear reader! |MDL 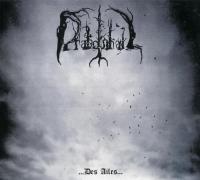 Dunkel is a prolific chap, his most well-known malevolence being manifested in Sale Freux, whose exiled wanderings have been producing some of the most unique, personal and clochardian emanations from French shores. However, whereas Sale Freux embodies the human occupation of the rustic French landscapes (and their avian compatriots), Dunkel’s voyages around the north of France within his ‘Fuite’, paeans to AOC alcohol and the free itinerant lifestyle, in Drakonhail he reflects a far more inhuman facet of France. Drakonhail acts as a medium for the genius loci of the fields, forests and grey skies of France d’Öil; of the damp darkness of December days spent tramping alone through mud and wood, all of which oozes from the music as an entrancing dirge. What we have in des ailes (and indeed in all of Drakonhail’s various releases) is not only the reflection of the artist’s impressions of the landscapes around him, but also that of the ageless spirit of these environments channelled through him. The result is a darkly wonderful schizophrenia, in which both artist and subject are given equal voice in the recording. Dunkel’s vocals sparsely wretch and moan over the top in a rather appropriately corvid manner. They are consistently downbeat, echoing over each strike of the drum and cymbal as if from a great distance across the fields like some eerie village church bell tower; towering over the guitars, whose tones are a mixture of grey ether, damp leaves and mud. There is something deliciously indulgent in this double disc offering (itself the best ‘produced’ in the Drakonhail discography and an excellent introduction to the band’s murky and highly individual world, with every other release focusing on a variance within the atmospheres offered here), with tracks on the second disc stretching beyond the 20-minute mark and usually advancing at a funereal pace, matching the cadence of tortured footfall across the land. Lest you think, however, that this is all atmosphere and no melody, then rest assured that such is not the case. Dunkel is a master of his craft, rickety and rustic as it may be, and he spins some of the most mesmerising riffs in his career over this sprawling creation. The instrumental Augustes corbeaux is a particular favourite, creating such a sense of melancholy, introspection and avian observation through a beautifully simple riff and tolling cymbals that it demands replay after replay, preferably with some suitably strong dark drink in hand. Depressive nostalgia, inhuman identification, rain, the scent of tilled earth in the night and the feeling that Dunkel really means what he creates here are all expressed within this album. It is a key to an unusually deep attachment to and exploration of the rural lands stretching across France d’Oïl. It is both an archive of exploration and a form of poetry no less vital than that of the Romanticists, albeit in an inverted sense. From this starting point, the listener can (if he is lucky) hunt down copies of Drakonhail’s highly limited cassettes, which bring forth deeper representations of the nocturnal, the mystical (in a wooded sense), the wandering and the monochrome days that are revealed in des ailes. Invest in this, dear reader – that is all I have to say to you; head over to France d’Oïl Productions where you will also find Drakonhail’s more nocturnal offering La nuit du Drakonhail and the splendid new Sale Freux album Crévecoeur. |MDL 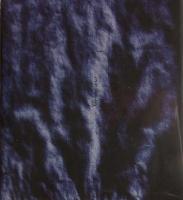 Speaking of which, it is worthwhile here to give an unjustly swift review of the new Sale Freux opus under that moniker, Crèvecoeur. As mentioned above with Drakonhail, Sale Freux has grown from a more exclusively corvid-centred project to a sort of travelogue of Dunkel’s ramblings and SDF lifestyle across northern France. Much like Autarcie, this is a form of tourism, however Dunkel invites you to traverse not just one region but many, absorbing their sights and smells through the bottom of copious glasses, revelling in their filth, heartbreak, folklore and the fug of the caravan. Musically, this is certainly Sale Freux at the top of its game, with melodies that bore into the head like worms which you’ll find yourself humming at work. Octobre holds almost folk-like janglings mid way through, and after a few spins you’ll be crowing along with the final caws of Sois ton proper oiseau (which translates to ‘Be your your own bird’). This latter song also exemplifies Dunkel’s world view in a nutshell: freedom – roaming without ties, free to live as he wishes and drink where he likes; a vision of itinerant liberty and rustic gutter poetry, weaving beauty out of the dirt of his travels in the fashion of Villon. Suitably therefore, wordplay is aplenty here as well for those who have a good grasp of French. This is illustrated delightfully by Dunkel’s shouted chants of “Oïl! Oïl! Oïl!” in Irancy, yelled deliriously (no doubt under the influence) both in defiance and celebration of the northern Gallic lands and niftily Galicising the raunchy “Oi! Oi!” of Albion. The production also illustrates a key difference between Drakonhail and Sale Freux; whereas the former has a dirge-like spaciousness, tolling across great grey landscapes, Sale Freux’s sound is immediate and visceral, as if Dunkel were leaning across some scarred old bar table (or indeed the cooker in his glorious ‘Fuite’), relating his thoughts and travels between glugs of good Burgundy or Pelforth. Crèvecoeur is also musically more complex than des ailes, relying less on hypnotic repetition than evolution, with dynamic riffs interspersing with skillful acoustic plucking. Lyrically the album is a narrative of solitary life, a journey to Irancy, invented folklores and nights alive with booze, all of which make Sale Freux’s latest the most personal to date. A lot of emotion and self has clearly been invested in Crèvecoeur, and repeated listens make this apparent, not least in conjunction with the photographs captured within the album booklet. Sale Freux has a style all of its own, which undoubtedly will not be to everyone’s taste. However, should you choose to take the hand of this boozy bard, this minstrel du mélancolie, this tremens troubadour, you will be taken on a journey like no other. Charge your glass, the ‘Fuite’ is afoot and we must climb aboard! |MDL