A review by Maximus

Like the rising sewage canals of a 15th Century town in the middle of a wet Spring, Peste Noire bubbles to the surface to be seen and smelled; like a sludge plant of the American Midwest, human refuse is turned into fertilizer, recycled into a virulent new creation. La Chaise-Dyable is this new creation: a compendium of familiar motifs, themes, visuals, odours, defecations, and revulsions recycled into one musical composition. The finished product is like a scrapbook of the Peste Noire discography, a mnemonic medley of aural recollections and reminders of who the band are and what they represent. Oozing with the same incurably diseased blood, the morbidly festering flesh, Peste Noire emerge again, a bulging, bloated corpse smothered by bubons and boils.

For all of that, however, La Chaise-Dyable is still a new creation, even if it has taken the shape of something remembering old creations. There is, after all, something palpably reflective about this album; the sense of reminiscence is pervasive and unmistakable. While Peste Noire have hitherto been renowned for their forward motion, for their unrelenting Blitzkrieg against convention and stagnancy and social malaise, there is presently a certain sensation of slowing down. Since the ancillary dimensions of the band remain unchanged, with the imagery and lyrical content maintaining the same sort of themes as ever, the focus on the surface remains that of any Peste Noire album: French nationalism, anti-Revolutionary sentiments, hooliganism, flagrant alcoholism, and an abiding interest in the Devil as the character of a medieval mystery play. The music, on the other hand, has been blunted somewhat; there is a conspicuous absence of that obnoxious, obvious virility that characterized earlier records. This is not necessarily a complaint, either, for it is equally conspicuous that the attention has been redirected inwardly. Instead of the abrasive, abusive, and jubilant rapaciousness that we have grown accustomed to, there is in La Chaise-Dyable an almost studious introversion, a self-investigation that, rather than continuing to explore new ground, required the recourse to earlier methods.

Firstly, this is superficially apparent in the incidental aspects of the album, in the techniques and talents and terrorism employed herein. The idiosyncratic oddities, such as coughing, the pouring of wine, etc., are once again manifest, only, instead of being seamlessly integrated into the actual music a la the “J’avais rêvé du Nord’ track on L’Ordure à l’état Pur, they exist on the fringes, serving only to colour the edges rather than making the meaningful contributions that they did in previous albums (though the accordion is very well executed in the finale, lending an agrarian and organic voice to the swaggering, cocksure narrative). The percussion is not nearly as martial or hateful: the blast beats are not as abundant, and even when present they are not as lively, being low in the mix and rather compressed. Famine’s vocals have solidified and taken on a less vitriolic flavour; instead of the anarchistic vehemence the listener can now detect a maturity (it would be too much to call him bourgeois!) and almost a nostalgic nature that we only heard in certain songs in prior years. The guitars retain that unusual tone, that dissonant and unabashed eccentricity, but they are less variegated, being deployed in more monotonous roles than in other albums, as will be explained below. These elements altogether cause an effect that is more notable in its lack of incision than anything else, but this reorientation of approach also helps explains that ‘introversion’ that is this album’s defining feature.

The reflective and ‘atavistic’ nature of this record is more importantly evident in the songwriting itself, both in terms of its intent and its structure. Since this is the immediate successor to Peste Noire‘s self-titled effort, it is only natural that that is the album from which La Chaise-Dyable takes the majority of its queues, especially in the first two tracks after the intro. First of all, “Le dernier putsch” is constructed around a lead that sounds like it is in the same vein as those found in tracks like “Démonarque” and “Niquez vos villes”. Varying the riff in timbre and pitch through several measures, the composer gives it a protean quality as it contorts throughout “Le dernier putsch”, offering the listener different angles of perception even as it remains the track’s fulcrum. This is suggestive of the aforementioned ‘reflective’ nature of La Chaise-Dyable, as already in the first real movement of the album there is a concentration on repeating and ruminating over a single motif.

The next track, “Payés sur la bête”, is structurally more linear, eschewing the recurrent riff for a gradual, diversified development that culminates in a moment very much like that of Peste Noire‘s “La bêche et l’épée contre l’usurier”. The most intense piece on the record in many ways, “Payés…” builds through a number of different phrasal patterns, alternating beats to create a heterogeneity that excites the track toward its climax. Then, in an act very similar to the apex of “La bêche…”, the male and female vocals are conjoined together over a blast beat and a stirring melody before the beat evolves into a double-bass snare beat. This releases the melody and the female vocals in particular, both of which rejoice in their newfound freedom and express a brave new power. This effectively finalizes what is overall a neatly composed track, but it is a track which cannot help but remind the listener of “La bêche…”.

To avoid degenerating into a song-by-song review, it will only be necessary to make a few passing notes on the other tracks of the record. It is interesting to note, in the context of our thesis for this album, just how much repetition there is: with the solitary exception of “Payés sur la bête”, every standard track is structurally centred around one or two motifs, which is particularly noteworthy considering the length of these tracks, with “Le Diable existe”, “A la Chaise-Dyable” and “Dans ma nuit” all being well over seven minutes in duration. The only other songs in the band’s history that really stand out in this way are “La condi hu”, “Moins trente degrés Celsius”, and possibly “Soleils couchants”, which are the closing tracks of the previous three albums. So to think that Peste Noire have already replicated these three tracks (in one sense, at any rate) is highly significant, and this significance consists in the singular lack of effort to acquire any level of variety or diversity in favour of establishing long, consistent narratives. This exemplifies the declining emphasis on fashioning a scathing, militant, scorching black metal unwilling to compromise or stagnate, and it also exemplifies the increasing emphasis on producing music that has instead focussed on fully exploring a motif before surrendering it to the void. All of this points again to this album’s reflective quality, as most of these tracks show an entrenched need to slowly survey a theme, hinting at the overall vision of this album, which seemingly consists of a retrospective pause in the band’s career.

We would be remiss if we did not at least mention the greater meaning of Peste Noire, even if it has now been deliberated on at some length by this site (and others), the irony of which is clarified by a line in “Payés sur la bête”: “Ta maladie Europe c’est l’intellectuel” (EN: “Europe, your disease is the intellectual”). The reality of Peste Noire subsists in their artistic vision and in their honest ideology that is made all the more honest in their utter lack of pretense (even as others make it for them). Their love for France means a hatred for modern France, for ‘la Marseillaise’, for the France as founded by the false principles of 1789. Their love for France stems from medieval France, to which some reference is made on any one of their albums, including this one, and it is this France, that of native European festivity, of women, wine, and croissants, for which Peste Noire are en garde. Peste Noire are therefore always a refreshing alternative in lyrical content from the usual black metal fare, which at best consists in a genuinely dark mysticism and at worst in a generic anti-Christian blasphemy or a clichéd paganistic nationalism. We can rest easy knowing that, given Famine’s simple, ordinary pleasures, there is no satanic sophistry here, no fetishization of a false elite, just “La dernier putsch”, the reversion of the hierarchy to its natural and legitimate order:

There can be no question that L’Ordure à l’état Pur is Peste Noire‘s best album; it shattered the dim and impotent customs of the black metal world with a violent new reimagining of the original black metal spirit. It is their high-water mark, and as such it will not be surpassed. We might even say that most of what is good in La Chaise-Dyable is already contained in L’Ordure. Peste Noire, with its heavy arsenal of riffs and slashing, drunken attacks, might be said to have exhausted the savage portion of its predecessor as La Chaise-Dyable is possibly now exhausting L’Ordure‘s contemplative portion. This album itself will be interesting to view in hindsight, to determine based on future albums whether it is a small downward step to further decline, or whether this is just a short rest on the road, a catching of breath, a preparation for harder paths ahead. Whatever the case, the fact is that this album is indeed contemplative, and its responsibility is as something that watches over history and records it, and in that role it succeeds beautifully: in La Chaise-Dyable the entire Peste Noire project is encapsulated, and is not less integral to it than any other album.

“The Devil pulls the strings which make us dance;
We find delight in the most loathsome things;
Some furtherance of hell each new day brings,
And yet we feel no horror in that rank advance.”

Charles Baudelaire, To the Reader 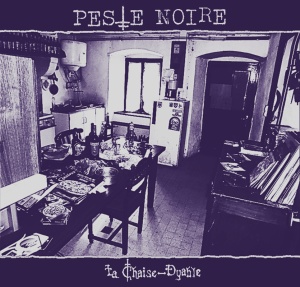 2 Comments on The Devil’s Putsch