This is the abridged version of an interview conducted with Isa. The full interview will be published as part of a feature on the band that will appear in the second physical edition of Black Ivory Tower magazine later this year.

While Isa‘s contribution to the magnificent folk split Spletenye was what brought them to our attention, the Siberian band’s two full-lengths are just as impressive. Their 2014 debut Pesni mërtvych (Songs of the dead) established their metal-influenced blend of ambient and dark folk. This month saw the digital release of Isa‘s new record, Otchod na zakate (Departure at sunset), which will also appear on CD soon. A perfect moment to talk to Alexander Rastvorov, the multi-instrumentalist and creative force behind Isa.

Within approximately 9 months, Isa has put out three records: two full-lengths and one split. This raises the question how they were be able to so prolific, and whether this (short) timespan has still allowed them to evolve musically and thematically between each release. “To start with, Pesni mërtvych was 90% my own work”, says Alexander, “but I was joined by my brother Artem for the track ‘Zoroastrian Sunset’ (from Spletenye, 2014 – ed.). It should be noted that we had a lot of material, which made it easier for us to put out multiple releases over a short period of time. Still, in regard to the depth of our themes, we may well have booked progress. For us, one of the functions of Isa is that of a tool with which we better comprehend the world around us. Isa is a cold creek whose ice scrapes the bottom, digging deeper into the earth slowly but patiently. As the growth of a tree, everything comes naturally.” 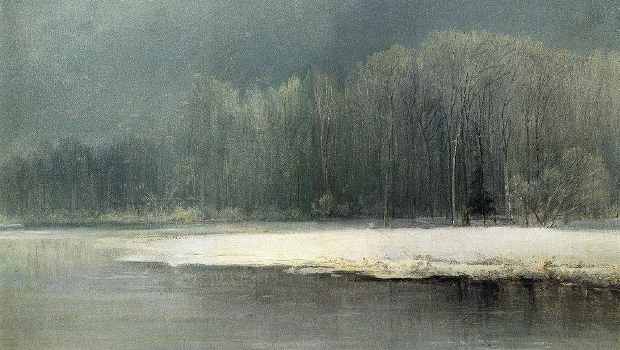 Even more so than his music, this conversation with Alexander immediately makes clear that, in his mind, everything is ultimately derivative of the nature where he spends most of his time, and where he feels more secure than in coarse, profane cityscapes: “Nature is not a wonder for us in the same way that it is for the majority of urban residents. Sometimes I go alone into the forest for a week to walk among deer and bears without weapons. I remove about fifty harvest bugs every day and keep myself hydrated by drinking swamp water. Nature is a palm of God from which we can drink. It is a temple in which you can find answers to all the questions, and where you can learn about real life.”

He does not say it with so many words, but Alexander would probably spend the majority of his life among the trees, marshes, meadows, burrows and wild animals if he could. But, like most of us, he has obligations which keep dragging him away from the pure taiga and back into the rowdy city. His native Novosibirsk is not without its own musical legacy, as the late punk / folk singer Yanka Dyagileva recorded her clandestine demos in Novosibirsk. Yegor Letov’s Grazhdanskaya Oborona, quite possibly the most influential modern band of the USSR and Russia, did the same whilst operating from the relatively closeby city of Omsk.

So could it be that, apart from their beloved taiga, Siberian city life has also exercised some influence over Isa‘s music? Alexander is not sure: “Siberian punk is an unusual phenomenon, of which Novosibirsk was the centre. But alas, it is an old story. Everything is long gone now: Yanka Dyagileva, Yegor Letov and Vadim Kuzmin (frontman of Chërniy Lukich – ed.) are all dead and buried. Is Isa, then, typical Novosibirsk music? I do not know. Every chance I get, I head off into the taiga, and my relation with the city only consists of a job, visits to exhibitions and drama theatre. Communication with the ground, animals, trees and stones is what affects us.” Maybe that is where the similarity with Novosibirsk’s musical history lies, ponders Alexander: “The music of both Dgyagileva and Isa is contemplative. Contemplation of the surrounding world and the desire to see life amidst this coldness make our music suchlike. Yanka walked a spiritual path, as do we.”

The idiosyncrasy of Isa‘s approach to metal makes it difficult to even classify them as such. On the surface, this can be noticed by how the ambient aspect of their music exercises a noticeable degree of domination over the sound. This has a decisive effect over the mood of Isa‘s music: despite the sadness that emerges from the compositions, this art ultimately always refers to something beautiful, rendering association with a tag such as ‘DSBM’ misplaced.

This reserved presence of metal in Isa makes sense, as the music is not even viewed as metal by its creator: “Usually, black metal is music which comes with the passionate expression of feelings. But passion blinds the mind. So how do you expect to find anything in life with a besotted mind? Feelings must pass through a peaceful heart, not predilection and sexual desire. Generally, we do not consider our music to be metal. Isa is a prayer for the ground, and nothing more. Hence why we also do not share metal’s usual obsession with fame: we do not burn with the desire that someone knows who is behind Isa. We scream and hiss for the earth, for these cold forests. Prayer may only take place in solitude and silence.”

Isa‘s fascination with nature and the eternal connect the band to the Slavs’ longstanding tradition of humble veneration for nature, embodied most poignantly by the Russian and Ukrainian landscape painters of the 19th and 20th Centuries. It is therefore no wonder that Isa‘s debut album borrows album art from Efim Volkov, with the subsequent Otchod na zakate featuring a painting by Volodymyr Orlovsky.

“Prayer may only take place in solitude and silence.”

Alexander’s rejection of the temporal, the transitory also explains his humility when it comes to how others respond to his music: “Vainglory has a detrimental effect. We are pleased to know that someone needed our music. Dostoevsky said: ‘Happiness lives when you take part in the fate of another person’. So we become a little bit happier.” In regard to the future of his band, Alexander remains equally sober: “What will be, will be. We do not have any long-term plans. Do not cross a bridge until you come to it.”

Until Isa crosses its next bridge, we can probably find its creator somewhere deep in the boreal forests that nurture his creativity. “This is the real order of things, where there is no death. There is only transition. And it is of little importance whether you will remain alive or get killed. Man should be treated with repentance and deep respect for nature.”

And so it shall be. Until worlds end and the seas run cold…