Well hot damn people. The Netherlands might be a first-world country, but when the power temporarily went down in the Amsterdam area, we experienced our first taste of the zombie apocalypse. Public transport was down, stores were forced to close, house alarms malfunctioned, and well, the internet got buggered. As a result of these circumstances, these two fine reviews by MDL will not be dragged down by half-drunk rambling on my own behalf, as I was too busy being stuck in transport. Read them while you still can. But do not fear the zombie apocalypse; it already arrived a long time ago (as pictured above). 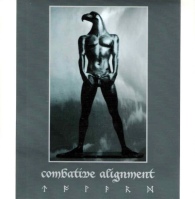 Working from the blueprint of Brian Eno (producer of such banalities as Music for Airports), ambient music can be seen in general as the wallflower of the musical world. Thankfully the introduction of industrial, martial and ritualistic flourishes has livened things up considerably. Step up ‘THE GERMANS’, particularly a duo who go by the monker Combative Alignment. Having listened to their final record Towards well over a thousand times, I can say that true to their name, this now defunct duo have produced some of the most intoxicating sounds ever to have graced my ears. Formed from 3 tracks, each roughly 20 minutes in length (“Towards the Morning”, “Towards the Evening” and “Towards the Life”), the mood and movement of these pieces form an audial equivalent of reading Julius Evola (particularly Meditations on the Peaks) and Guido von List. In essence, this is traditionalism imbued through sound. “Towards the Morning” places one amidst glistening mountain ranges, propelled further and higher into what a manipulated vocal sample declares as “the bright realm of values”, whilst a drum slowly beats in the background, the mood being bright and revelatory, even choral. “Towards the Evening” darkens the hue somewhat, introducing a Himalayan theme through Tibetan throat singing, ritualised percussion and ominous electronics. Finally, we emerge at “Towards the Life”, which (and let’s not mess around here) sticks you straight into some manner of Order castle (I am personally betting on Wewelsburg). There is a mood of great antiquity, slamming doors, majesty, hidden power and as the track unfurls, a vast ancestral landscape accompanied by a sampled voice which talks about a dream in which there was a great nothingness, a primal void. This is Ahnenerbe territory. So fuck airports, true ambient delves into the earth and drags us into the light. |MDL 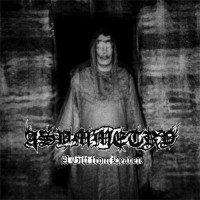 Typically, the last thing that one would expect from a black metal album title is that it has been handed down from the clouds. Typically, there would the odd ‘Goat’ reference, something about whores, and possibly some pseudo-blitzkrieg or ‘svper occvlt’ tag line. Asymmetry, living up to their unusual namesake, take a different titular approach and one can hardly argue with them. The first thing that the listener might pick up here are the drums, and believe you me their tight rhythms with fills in all the right places are indeed some sort of manna. They form the forefront backbone upon which the flayed skin of hazy, over-tremoloed riffs hangs. This is tagged in several distros as ‘mystical black metal’, and whilst that might sound like the biggest load of horse shite tagline since Marduk’s ‘Panzer’ obsession, it actually pays off. There is something about the pristine skin beating, the howled/shrieked vocals which echo down the speaker over the guitar lines which are a combination of MDMA-pumped melancholia and ekstasis that really lives up to the name of the third song “Six Keys of Exodus”. The melodies tend to stick to a couple forms, but frankly when they are this mesmerising, you don’t want them to change, let alone end, especially when they switch into major keys and breathe their sublime syncopation into your heart. Throw in the cover art of a double exposure of some Ghast emerging from what looks like a tomb and you have one of the most underrated black metal albums encountered. It can’t be stressed what a joy the drums are to hear, each beat accurate, but not mechanic, organically bouncing along with the melody which makes you just want to fucking learn drums from the musician responsible. When you deal with titles like “Moisture”’, “The Fire’s Song” and “Old Timber”, it’ll either all be bollocks or something genuinely special. Happily, Asymmetry presents us with the latter, and if you don’t delve into those mysteries then I say you are a fool. |MDL

Cover image taken from thezooom.com. Original author could not be found.