Initially there was going to be a different theme for the current rendition of Don’t Enter. But seeing as I was supposed to be at the gym at the time of writing this entry – a plan that was foiled by a minor but lingering football injury – it seemed only appropriate to give you a few of my favourite albums to play while you’re at the gym. Now I know there are people out there with very strict demands in regard to the tempo, timbre and whatnot of their gym soundtrack, but I just have one standard: if it makes me want to pump iron and spit fire, it is good. 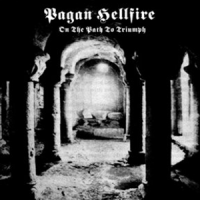 For me, the challenge of going to the gym on a regular basis does not consist in overcoming any reluctance to drive my body to the limit, but rather in coping with the depressing ’90s trance hits my gym blares out of the speakers without pause nor remorse. I was always under the impression that gym music should motivate me to crush weights and blast any remaining energy on a spinbike or treadmill. And not to contemplate how humanity let the ’90s happen and how ashamed I should feel for having been a part of it. Hence why the music you bring along to the gym must be loud, as it is essential that it block out the usual shit that assaults your ears during your routine. Pagan Hellfire‘s On The Path To Triumph is perfect in this regard, as it offers 50 minutes worth of relentless black metal dedicated to war, blood, guts and glory. On the surface, this raw underground gem may seem like it is a tad generic, but then you discover how consistently amazing the riffs are. On The Path To Triumph has as few weak moments as it has breathing pauses, so it is ideal for a work-out where you are just looking to thrash your own body unrelentingly before you go about your daily activities, regardless from whether they comprise being offended by band names or running the world’s best metal site. |Degtyarov

(A full review of this album can be read here.) 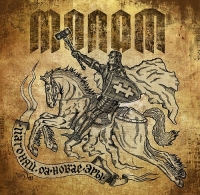 There are few other metal bands that went through a musical evolution as remarkable as Molat. These Belarusians’ first incarnation was the shoddy folk metal band Apraxia, which throughout the nineties and early noughties released a number of clumsy albums that were overly amateuristic but nonetheless managed to influence a good number of later Belarusian folk/black metal projects, including the great Kamaedzitca. In 2003 they changed their name to Molat (or Molot, should you prefer the Russian spelling over the Belarusian one) and started playing extremely loud, scruffy RAC in the vein of Endstufe, one of whose songs they also covered on the first album put out under their new name. The second album, known in English as Resurrection of heroes, re-established the folk influence known from the Apraxia days. A transitional album, Resurrection of heroes served as proof-of-concept and is not very enjoyable in its own right due to the weak sound and even weaker vocals. On their 2012 album Pahonya da novae ery, however, Molat finally nailed the sound they had been aiming for ever since emerging under the Apraxia banner almost two decades earlier. This album combines the ferocious Oi of Molat‘s debut whilst adding folk instruments in such a way that they do not diminish, but rather contribute towards the aggressive power that emanates from these battle hymns. Much like their friends of Kamaedzitca, they often promote self-discipline and physical fitness, so it should be easy to see how the resultant music is best when combined with showing those fucking dumbells who’s boss. |Degtyarov

When it comes to metal bands genre-hopping, Dub  Buk also switched things around quite a bit. Starting out with melodic black metal in the late ’90s, they gradually moved towards thrash metal while also throwing a bit of folk into the mix along the way. Tsvyach, which might very well be their last album, sees the band complete its transition to a thrash/death metal band. While this release does not possess the same subtle glory of albums such as Idu na wy and Rus ponad use, it contains by far the most aggressive music this band has ever recorded, thus making it an ideal gym record. Aided by raw power akin to the Pagan Hellfire record discussed earlier, Tsvyach will see you through those days at the gym where you go all the way. Furious thrash riffs are kicked into your ears, while Izverg’s guttural screams remind you that the more you sweat in training, the less you bleed in combat. Now all you need to do is pretend the punching bag is really a politician of your choice, and you should be able emerge victoriously from many fistfights yet to come. |Degtyarov