Belarus is one of the only remaining countries in Europe which still has a fresh memory of its pagan origins. A rural country covered largely in marshlands, Belarus and its people stand as close to their ancient gods as they do to their nature, their fauna and of course their music tradition. This week’s rendition of Don’t Enter offers you three fine examples of how traditional Belarusian music reaches into the 21st Century in a more profound and sincere fashion than most of the folk acts that sprung from other patches of Europe’s rich soil. This gives birth to the following dilemma: is traditional music preserved better in Europe’s last dictatorship than it is in its umpteenth smelly democracy? 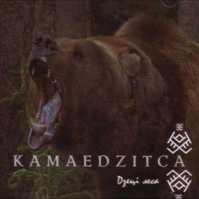 Our appreciation of Kamaedzitca is well-known. As one of the only contemporary music artists to express true individuality through its creations, Kamaedzitca is one of the biggest exhibits of the message we have been pushing for years; that Eastern Europe is where it’s at these days. No, they do not possess decadent amounts of wealth, but whether it is music, film or mere video games, if it weren’t for the Slavs’ efforts, one would think humanity as a whole stopped trying to move forward culturally. While Kamaedzitca‘s monumental efforts are later albums such as Voiceless are your words and Man of the planet, it is still worth sailing down the band’s roots and landing your feet on the solid ground of 2004, the year in which the band’s debut full-length Dzetsi lesa was released. While this first opus is considerably more ‘basic’ in the light of the direction these convention-smashing Belarusians have taken since, it is still a remarkably tasteful folk record. Dressed in traditional garb and armed with bagpipes and flutes, Kamaedzitca look like they are about to deliver stock, subpar partyfolk in imitation of Korpiklaani‘s bouncy trollcore and other such abominations. Instead, the band offers an unusual blend of melodeath and folk metal, livened up with more genuine influences of traditional Belarusian music. Particularly surprising is the clear production, which allows every musician to make an audible contribution to the overall sound structure. Their display of skill fortunately extends to the traditional instruments, helping Kamaedzitca avoid the pitfall of forebear-insulting crappiness that folk metal bands commonly get suckered into by their own unjustified exuberance. On the whole, this record makes you wonder what would have happened if Kamaedzitca‘s initial formation had stayed together rather than dissolving after two albums. Then again, that would have meant that Voiceless are your words would never have happened. And that is just unacceptable. |Degtyarov

As if there was ever any doubt about the close correlation between the Eastern European metal scene and their traditional music traditions, På Gamle Stier – the label that Kamaedzitca are currently signed to – also has a folk group among its ranks – Horyń. While this may not be too surprising in itself, realise that this is a genuine folk group and not an Eluveitie-tier bunch of LARPing losers who mimick folk music only in timbre but not in spirit. Rather than getting entangled in writing badly disguised pop songs and signing sponsorship deals with Honda, Horyń travel around the countryside of their native Belarus, learn folk songs from the locals, and reproduce them on record with as much authenticity as possible (so without making their own arrangements). This all-female choir delivers most of its songs a capella, with only the occasional flute or bagpipe breaking the instrumental reticence. As a result, Horyń‘s soothing repertoire exhales a flavour of serenity that can only be experienced in the rural context from which this music emerges. Paradoxically, it is the simplicity of these countryside hymns that inspires contemplation. One of the final remnants of a traditional realm, the final notes of Da padaj, Boža, klučy plunge us back into this bizarro nuthouse of a world more bellicose than ever. After all, leaving the comfort of a warm house only makes the cold more unbearable. Yet we lack the means to make the cold go away. Alas, let us ride the tiger. |Degtyarov

Minsk natives Stary Olsa have been creating folk music since 1999, but despite their consistent dedication to traditional tunes, their sound has evolved drastically over the years. Their debut Kelih kola (2000) features easy-going, flute-based arrangements of compositions from the Middle Ages and early Renaissance, while the subsequent album Vir (2001) focuses exclusively on the bagpipe. Heraichny epas (2006), which might be their best album to date, offers music from the Grand Duchy of Lithuania (which stretched across Belarus before its collapse in the 18th Century) chronicling glorious battles and other historical events. More recently, Stary Olsa caught the eye of an international audience with their folk-inspired covers of songs by Deep Purple and Metallica. Great though it may have been to see Stary Olsa showcase their technical prowess on an accessible level, the band is at its best when it plays its catchy arrangements of historical music. Drygula (2009) confirms this with its rich offering of dance music originating from the 14th to the 17th Century. Across the album’s 13 tracks, Stary Olsa invokes music from both the East and West of Europe, revealing the subtle differences in mood and pace between these two musical traditions of the Old Continent. In spite of a few slip-ups, particularly some off-key blemishes on the last track, the instrumentation is generally handled very well, which is far from a given in folk(-inspired) music. In terms of pace and atmosphere, Drygula has a sound that stands in line with the direction the band has taken since Heraichny epas, making for rich instrumentation and an almost bombastic cadence pulsing through the music. Stary Olsa honours the past of our collective homeland and reminds us of what once was lest our memory become clouded. |Degtyarov

The featured image is Ivan Shishkin’s painting of the Pinsk Marshes, located in present-day Belarus.

Thanks to N. for corrections.