In this edition of Don’t Enter, we take a look at two releases from Britain and one split from their former opiate colony China. If there is a consistent theme to be derived from this particular instalment of the Don’t Enter series, it is the large gap in quality between the bands discussed. As such, it remains unsure whether it is a good or a bad thing that UKBM has not yet managed to penetrate the ears of Continental black metal fans. Ooer, sounds a bit rude! 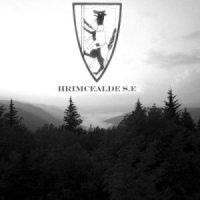 English Black Metal. Oh yes, we’ve all laughed about Dani Filth, and let’s face it: as country England doesn’t exactly ‘do’ black metal in quite such a successful way as others (see the Eastern Front for a prime example) – perhaps, like our lack of dictatorships, we just can’t take ourselves seriously enough to quite believe in the grimness and spikes game. Then along come bands like Winterfylleth, Fen and Wodensthrone who, with barely a glimmer of sooty eyes and leather jackets, make some quite good music linked to English heritage (not English Heritage©) and all the music mags ooze adulation and praise. But, these groups (good as they are) are merely the tip of an understated iceberg. Reach back to 2003 and we have the emergence of Ashes, whose final album Hreow (2014) is a thing of crafted beauty, and new acts such as Crom Dubh, Ildra, Forest Grave and White Medal (along with other Legion Blotan projects) have helped to bring about a DIY, heritage-centric and highly idiosyncratic English BM ‘scene’. However, one group seems to have been entirely and unfairly overlooked; the majestic Ealdulf, who in 2009 released their only full-length to date (new album in 2015 apparently) entitled Hrimcealde Sæ (‘The Ice Cold Sea’). As might be imagined from Ye Olde English album name and the track titles, this record deals with themes of the Saxon arrival to England, origin myths, the ‘whale road’ and conjures a richly evocative tapestry of fogged English forests, moorlands and valleys. The drumming style provokes a tidal feel, which gives the impression of the album being experienced as a journey across the waves and into the land, propelled by twists and turns in the song structures. Epic without being cliché, dripping with interwoven melodies, and possessing some unusual and effective syncopated rhythms (especially prominent on the first track, “Hrusan Heolstre Biwrah” (“In the Darkness of the Earth”) coupled with some fine production values, this album also acts as a modern sonic interpretation and repository of the Anglo Saxon ‘origin myth’ and wyrd (see the ending of “Wyrde Wiðstondan” (“Withstand Fate”). Ealdulf should be of interest to anyone who seeks for more within their music than mere ‘feeling’ and entertainment – a primordial quality runs through Hrimcealde Sæ, putting the English land back in the forefront of the picture, which surely is a success for any group using such themes. Furthermore, be sure to examine their EP Wolven Sentinels, where the middle passage of the song “Lindum Colonia” (the Latin name for Lincoln) conjures images of wandering the streets during their 5th century abandonment by Romano-Britains. Historians rejoice, for another group emerges who have a handle on their own history! |MDL

Links:
Bandcamp (does not feature the current release)
Youtube

Here is an unusual idea: a black metal concept album about spreading disease and human tragedy that does not regard the actual disease with a lot of attention. Heroic survivors of the 2002/03 SARS epidemic in China, local bands Ululate (哀嚎), Heartless and Martyrdom (殉难) instead chose to address the suffering caused by those who took advantage of the epidemy and the uncaring government, seemingly more concerned with preserving face and lying about the disease’s severity. Bands from countries facing as of yet limited familiarity with the cultural roots of black metal, in Asia or overseas, tend to run a gamut of decent to cringe-worthy – something that is also prominent on this album. Given the excellent opening Ululate provides, all is forgiven. Their Chinese-language songs are are the manifestation of anger, anger against a monolithic government and the failings of their fellow man. Much unlike the more sensual soundscapes of other Chinese bands reviewed here, Ululate‘s style is personal, unadorned, aggressive; a dirty sound perhaps more reminiscent of old oi bands than the stereotypical offering one might expect. Unfortunately, theirs is not the entirety of the album, as a whole third of it is dedicated to Heartless, a band whose mastery of poetry and vision predates the 2013 AOTY Sunbather by seven whole years, offering heartfelt insights on the human side of the tragedy with statements such as “I must end myself” and “Darkness in my mind”, proving beyond a reasonable doubt that this edgy one-man operation is particularly well-versed in the sacred art of childish rage against the system. Musically, they take a page out of every “depressive” band ever and do it so well one might hardly be able to tell the difference. The initial love-affair, now rapidly transforming into an awkward silence as my lustful advance into this musical terrain is halted, takes a turn for the strange. Martyrdom‘s third is expertly composed, exhibits undeniably apt musicianship and seems thoroughly unrelated to the subject matter. In frank words, if the somewhat stereotypical subject matter of demon sacrifice be forgiven, it is fucking excellent. Their impact is only lessened by the fact this could have come from anywhere and has little cultural identity on its own. As for where to acquire the work of this triune, perhaps it is time to plan a vacation to the People’s Republic. Failing that, in the words of the great poet Wang Bo: 儿女共沾巾. |Chairman Poswicht

Mixing black metal with other styles can work as long as it is a ‘best of both worlds’ type of affair. Connecting two or more genres in a logical fashion requires a careful selection of those stylistic elements that may enrich the overall concoction. Akitsa, for example, use the uncompromising ferocity of black metal to make the punk/oi side of their being carry a much heavier punch, while in turn their punkish primitivity is employed to underline the nihilistic, war-fueled aesthetic of the project. This is exactly where the English black metal band Caïna goes wrong. While incorporating influences of the inherently simplistic hardcore genre, the band aims for a more ‘high-brow’ approach to black metal, making their resultant full-length Setter of Unseen Snares come out as a rather confusing ordeal. At first, the album offers a series of short tracks that are characterised by woefully unstructured song-writing. Largely, the hardcore influence consists therein that, whenever the band seems unsure on how to follow up the initial riff of a song, they just start bashing the drum kit as fast as possible over a stock riff. As a result, a song such as “Applicant | Supplicant” turns into a potpourri of random ideas thrown together to conform to the latest trends. Instead of using the shorter song lengths to deliver a more comprehensive, compact set of ideas, the compositions simply fail to develop any atmosphere or idea beyond its premier form. The album ends with “Orphan”, which lamentably takes up no less than half of the total running time. With the singer’s minutes-long wailing over your typical maudlin post-whatever riffs, this song initially falls into what a Dutch radio DJ mockingly labelled ‘bedwetter music’, referring to artists who aim for ‘easy access’ to the listener’s sentiment with cheap emotional thrills, failing to leave a lasting impression. Around the half-way point, the band abruptly changes gears to a lackluster imitation of mid-era Alcest, ruining any atmospheric build-up that could have theoretically emerged from the composition’s inaugural bawling. After a merciless 15 minutes, this drawn-out dud is finally laid to rest and the listener is left none the wiser. “Orphan” and its total lack of structure represent Caïna‘s latest album in its entirety: Setter of Unseen Snares is a disjointed piece of music that fails to convey or develop any ideas across or within songs, making the listening experience as a whole one of the most meager, messy displays of black metal in quite a while. And sure, I get that some people out there are yearning for progressive-minded black metal, but for God’s sake, someone tell the emperor to put his clothes back on and stop mixing his beverages so carelessly. |Degtyarov