Despite the term presently being identified with clumsiness or lack of knowledge, I take great pride in being an amateur.  This word of Latin origin reached the English language through French and can be translated as ‘lover’, or rather ‘one who loves’. An amateur engages in an activity – in my case writing – for the mere pleasure of it. As someone who has never been paid a dime for his music-related write-ups [1], I am as amateuristic as they come. While I would definitely not object in the case a mysterious maecenas should decide to reward my activities on a monthly basis, there are perks to being free from the baneful entity we know as cold-blooded cash. With no money on the monopoly board, you have no-one to answer to. That does not just refer to a mischievous editor-in-chief shooting down your stuff because it happens to conflict with his mundane interests, but also to the fact that you are relieved from having to partake in the perpetual promo merry-go-round. Covering the latest releases lands you more clicks, but it also goes at the expense of depth. Some metal releases require weeks or even months of dedication and patience before they allow you to unearth their true brilliance. Fortunately, those who are not distracted by the prospect of dwindling ad revenue can afford to wait until that happens. Blessed are the poor, indeed.

Sühnopfer‘s Offertoire has been out since the 1st of December, 2014, much too late of course for the tons of gratuitous end-of-year lists that were no doubt already sealed in the minds of their authors in the moist dreariness of mid-November. Perhaps it is for the better that most music critics did not hastily assess the qualities of this album to see if it could somehow still be included in their suspiciously unanimous catalogues of superlativity. After all, Offertoire is not the sort of album you want to review with a testy editor breathing down your neck. Its intricate compositions betray the mind of a perfectionist, whose baroque-flavoured brutality presents itself to the listener as an aural puzzle that overwhelms during the premier performances of the opus. Only those who possess the patience and time to unravel during each subsequent session more of Sühnopfer‘s prodigious assembly will reach the vertex of excellence that houses the soul of this band’s latest, aptly titled sacrifice.

Offertoire builds upon the band’s own well-cemented foundation, collectively laid by L’aube des trépassés (2007) and Nos sombres chapelles (2010). Lamentably, all too many people missed out on these releases, which are the band’s defining acts of war. L’aube des trépassés was a short but stellar EP full of barbarous black metal about shooting people in the face with crossbows, all the while debut full-length Nos sombres chapelles finally proved beyond a reasonable doubt that the Bourbonnais entity Sühnopfer could afford to kick arse over the course of an entire album. Offertoire takes the the extreme speed and mediaeval themes of its predecessors and expands upon these traits with more lengthy, ambitious compositions that test sole member Ardraos’s music-writing skills to the nth degree.

Indeed, one thing that still remains unbelievable about Sühnopfer is that its ‘line-up’ is much rather a dot, as it consists of exactly one man. Ardraos, a versatile musician whom you may also know as the idiosyncratic percussionist of other French formations such as Peste Noire, Christicide and Lemovice, pushes his virtuosic tendencies to the next level with his trademark drumming, which he uses to transmogrify his killer guitar riffs by chasing them through impossible twists and turns until the album’s merciful last notes. With his unfathomably broad palette of tempi and rhythmic frills, Ardraos ensures that not a single riff heard on this album truly sounds the same. His MO characterises the sort of artisan approach that you would expect from an artist forged by the rustic hardships of Central France, infusing his musicianship with a sincere character that is as essential to his delivery as the technical prowess that stands at its base. Those who pose that authenticity is something to be mocked or even denied altogether should take note as Offertoire reveals that it takes more than a mere pulse to distinguish oneself from a drum computer.

In the case of Sühnopfer, noting the sheer quality of the percussion is a double-edged sword, as it could hint towards the flagrantly false notion that the drums are the only attraction to be found in this theme park of break-neck black metal. Even more so than in the earlier stages of Sühnopfer‘s career, Ardraos goes all-out with the guitars, boasting his complete mastery of the six-string axe by having multiple lead guitars blare into your ears, literally almost non-stop. Meanwhile, Ardraos plays the bass guitar with similar liveliness and colour, as this instrument contributes its fair share to the melodious framework that towers above the infernal thrashing that he bestows upon his drum kit. Even though his merit as a drummer may imply that Ardraos’s primary focus lies with rhythm, every riff is conversely a melody-driven marvel, complex its own right, yet structured to the point of perfection by carefully crafted arrangements that more than accomplish the fastidious task of driving all these impertinent, energetic riffs into the same pen and chaining them to the underlying structure. More than ever before, frater Ardraos distinguishes himself as a sagacious song-writer who delivers the sort of black metal that truly takes no prisoners.

Talking of prisoners, the voice Ardraos delivers on Offertoire is once again the most reminiscent of Varg Vikernes’s early work. While the music itself evokes comparisons with Sacramentum, Dissection and Satyricon (the opening riff of “Chevalier maudit” reminds of the iconic lead guitar ouverture to “Morther North”), the tormented howls unleashed by Sühnopfer rather recall Burzum‘s first thrusts into black metal infamy. However, where Varg’s over-the-top wailing occasionally came across as semi-comical, Ardraos’s shrieks resound with hellish allure, amplifying the listener’s immersion into these nefarious compositions rather than diminishing it. Obscure tales and local mediaeval legends are spewed into the instrumental fray with such fury that it seems as if they are being narrated by Beelzebub himself. Aided by choirs and gregoric chanting, Ardraos registers a vocal performance that helps Offertoire emanate a morbidly epic radiation that his preceding work – while solid in its own right – did not possess; at least not to this degree.

Sühnopfer does all the right things to grant Offertoire the fate of becoming a timeless record. Even after listening to it over two dozen times, there is still the feeling there are more treasures that remain hidden underneath this dense, grandiose black metal. Here we have a band run single-handedly by a man who could easily replace a member of 95% of the black metal formations on any position and improve the band notably. On top of these instrumental distinctions, Ardraos just happens to have reached his song-writing apex with this album. Taking shots at Offertoire would require genuine nitpicking, as the only complaints can be attributed to there not being enough breathing pauses between all the black metal violence, and the bass not being loud enough on occasions. Quibbles aside, those in search of reasons to postpone listening to this record are, quite simply, fresh out of luck.

With his latest offering, Ardraos discerns himself as a craftsman who unites the perks of both amateurism and professionalism, displaying a soulful passion for his art while simultaneously imparting an amount of technical baggage that can only be possessed by an individual who lives a considerable part of his life in the service of his music. He also provides evidence of how – entertaining as it may be at times – futile all our end-of-year squabbling really is. Even if Offertoire had been released months earlier (which almost happened until the printing company fucked up the digipacks), I would merely have been able to scratch its surface if I still had the tons of worthwhile black metal releases of 2014 lined up in front of me, all nervously awaiting my brusque judgment as the forboding deadline known as New Year’s Eve crawled ever closer. In regard to my own stance, whether Offertoire is the very best black metal release of 2014 shall henceforth remain a question without an answer. It will suffice to know that this is one of the finest displays of black metal in recent years and you would be a downright fool not to verify this for yourself – no matter how massive your backlog may be. 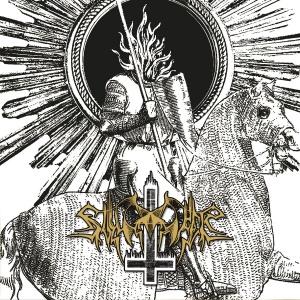 See also:
The Eternal Sacrifice – an interview with Ardraos (August 2013)

Notes:
[1] Except the zine, but I did not exactly make a profit.

1 Comment on Sühnopfer – Offertoire: A review by a voluntary beggar