Spain
Number of issues: 2
Review based on issue: 2
Lay-out: Black & white, A5, 92 pages
Focus: To crush ze enemy, see zem driven before you and hear ze lamentäschen of ze women

Review:
Just to be clear, when Black Ivory Tower #1 was in the making, I had personally not read any underground metal zines apart from Slayer. So maybe our unique approach was a result of ignorance rather than a bold act of conscientious non-conformity. In any case, I soon became interested in what other publishers were up to, so I started hoarding underground zines, and By This Axe I Rule was the first publication I got my greedy hands on. I immediately loved its compact, basic design consisting of Conan references, depraved artistic imagery and eerie photographs. In terms of its content, quality varies across the board, most probably because its editor David decided to include some interviews he conducted earlier for a different publication. This becomes particularly apparent in the interview with Anguish, in which David tries his best to ask get some worthwhile information out of the band members, but they were clearly not in the mood to give any answers beyond the scope of ‘yes’ or ‘no’. Throughout most of the interviews, David displays a decent amount of knowledge and asks some interesting questions, with varying results depending on the bands’ willingness to cooperate. At occasions, David’s writing may appear a bit convoluted, making not every question as easy to understand, but in general he’s a more than competent writer as far as zine warriors go. My wishes for the next issue would be tighter editing and excluding interviews that turned out half-baked because of the bands. 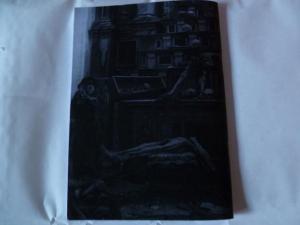