Go here for translations of the other Peste Noire albums.

Shit-coloured days, twilight-flavoured
Filthy life… Around me these scoundrels
These dog-men suffocate me
Of my skull
They have made a cell, a cave
Where crimes, neuroses and black thoughts
Like toads leap,
Swarming!
Of beatings and droppings
My memory is daubed
My present devoured
By depression. 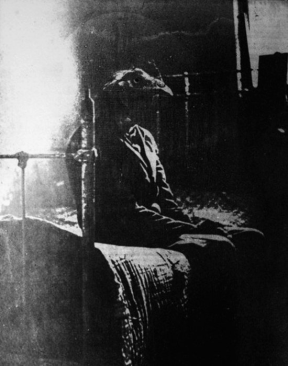 Worms and warts the obsessions
Have locked me up and suggest
That the future is rancid…
My head clad with grimoires
These balls and chains shackling me to this world
I cannot advance… unfit.
I am the bedridden one
Whose flight and wanderings
Happen only underground
Buried alive amongst the living
I have visited Hell
Covered with psychiatrix.
Opening my sails to the winds
Of death I’ve entered the matrix
Of the world, descending at 200 mph
Along its roots.
At the very bottom of the crater
I found Our Father
Who gave me the Sense
The science of the Earth,
The science of Evil which acts as a vaccine.
Like the plague and the famine
So I climbed up again,
Full of murderous madness
Up there, for the highest mastery of all.

Black sperm you meddle night after night
Carnage ingrown in the heart of the orifices,
Criminal squalor at the base of greasy slits,
Snow, burning, which ices for ever
The hot bodies for a night,
Rapt,

That tomorrow fade away
The lecherous bark
Slowly flayed…
Goddess AIDS you rot
Devastate
The human pigsty.
Your preys, corpse-like
Faces ravaged, pallid as a tomb
Fallen into the ditch
Where all the obsolete lie,
Sink
In the sewer of oblivion…
In their pit henceforth
They cry and contemplate
The earthly temple
Of the living,
The only one ever
Which allowed them to
Reach the sky

La fin del secle [The end of the world]

a mighty whirlwind, tempests of wind and thunder,
rains and hailstones, great and immeasurable,
bolts of lightning hurtling and hurtling down:
it is, in truth, a trembling of the earth.
From Saint Michael–in–Peril to the Saints,
from Besançon to the port of Wissant,
there is no house whose veil of walls does not rumble.
A great darkness at noon falls on the land,
there is no light but when the heavens crack.
No man sees this who is not terrified,
and many say: ‘The Last Day! Judgment Day!
The end! The end of the world is upon us!’
They do not know, they do not speak the truth:
it is the world wide grief for the death of Roland.

D’un vilain [From a villain]

Loves even better, this is the sum,
Than a subtle cleric or than a wise man.
These savage countrymen, these wild boars,
These villains with sabots
Love even better than kings must have.
More welcomed by God into the sky above
Are the villains with white mantles,
The widows, the little old ladies,
The lepers, the dwarfs, the cripples
The deformed and the humpbacks
Than the fair of face.
The strong, the valiant, the good-looking, the noble
All the great dames and ladies fair,
Who costly robes and ermines wear,
Kings, queens, and countesses and lords
Come down to hell in endless hordes;
While up the heaven go the lamed,
The dwarfs, the humpbacks, and the maimed;
To heaven goes the whole riff-raff;
We get the grain and God the chaff.’

Once you laid a microbe in my head.

Since this…the microbe is growing; as a tapeworm
From inside it suckles, feasts on the heat and colours
Of my body, causing me to go under the ground

Into the swamp of life avoiding the slatterns
I swim filthy and alone like a shark, hammerheaded:
Being bound to swim, attaching myself to someone
That would be sinking into the dregs…

Already an old man at twenty years old
I speak Medieval French better than French,
It’s because I prefer the dead languages.
Rather than living beings.
Although with the dead and the words
I have no friendly escorts other
Than the Medieval demons,
In the evenings only a conjured Hecate
To move my right hand.

A troll, too ugly, under psychiatric control
I am an isolated case, this humourless suicidal bomber
In a chemical straitjacket
A wretched beggar who mouths
Only obscenities, under the orders of Malfé,
In an old badly wrought Black Metal…

God, I don’t want to replace him no,
Just kill him; Since guilty of nothing however
Of the great melancholic I always had the tears
And of the terrorised, the eternal colic.
Totally paranoid my only friends are weapons,
In the woods and my cellar I drink and hide,
Because the sun’s rays reveal the stains…

Once you laid a microbe in my head.

This microbe grew and took so much space
That today it has merged with its host :
If the human that I was is no longer any more than a carcass,
The microbe that grew is a man now
A man that replaces me,
As hard, as cold, as effective
As tempered steel. Listen carefully:
The bullet you will take in the head
It’s him, our child
For if you have forgotten
The distant times of your laying
My childhood still cries for revenge
And for its laying, in turn
It will come back to fuck you.

Sonnet for a pregnant lady

Your plump belly nourished with white helminths
Too quick to defecate the fruits of a sanious pintle.

I sucked your doll and I sucked the spear
That to extract your half-matured worm
Sank into your wet decaying flesh
And drained the silent husk to me.

It was a beautiful baby… He had the stumps
Of his mother! The deathly and cute complexion
Of your body pruned under the dancing blade.

Its hide slashed according to my beautiful fantasy
Delicious exuded the sexual aroma
Of these stinking stillborns deprived too early of childhood.

[Introduction: ‘In the same way that we feel alienated from a world we look down upon and wish to eradicate, the ancient sorcerers were the anarchists of the past. As much as we loathe our fellow Americanised boeotians, they also despised the priests, the kings and the rich. They too would conjure the most nefarious of spells during their nocturnal rites. Poison they did, yet with much more devastation, scattering in the fields the powder that decimates the harvest, burying under the cowsheds the magic bombs killing the cattle. And, above all, they tormented the young ones, who by not keeping the toads refused to take part in the initiation, decimated, yet with more extremism and religious fanaticism than modern day anarchists, assailed mankind especially, everywhere it could, knowing very well that regardless of what Man may do, he shall always be Man, a vile, egoistic creature, plunderer of his fellow man’s heritage, the shame of the world… the disgrace of the world. It became a mystical goal of theirs to rid the universe of this human leprosy which infests Good Mother Nature, contaminating the Earth, meant to be free and who debases itself by being the enslaved nurturer.’ (preached by L’Atrabilaire Maldoror in his radio program ‘Les Chants de Maldoror’; translated by Carnage)]

The wolves devour us,

Strangle us and kill us,
The mortality is so vast
In villages, in towns and in cities
And throughout the whole flat country
That it astounds all;
Everyone hears worse prophecies
For the people and for the Church,
So many will be squatting;
When everyone says: ‘You’ll suffer worse ills,
So much pain and misfortune,
So many mishaps and pestilence’
Who will be able to endure these hardships,
How can one possibly survive?
In comparison the ten plagues of Egypt
Were but a little thing indeed.

Of those who led happy lives;
In nothing did it matter to me,
That to my mind, ’twas all the same
To do something very dreadful
As to do a kindness.
Love didn’t love me nor did I love it,
And so I resembled him
Who is compared to an old tree stump
Which in a rising tide lies low
And which is so covered o’er
That no one can work it free
No one can pull it out from there
From the water that has covered it.

Lord, here flows the blood of our land.
I hear the noise it makes whilst falling on the earth,

The thud, from five years of enemy struggles.
Of these drops falling down from the bodies of so many brothers.

Lord, here is the blood of our race flowing,
Blood of warlike battle, Blood of civil wars,
Blood of darkened homes that a few flames erase,
Blood of those who are shot in the ditches of our towns.

Lord, here is the blood of our earth flowing.
The blood that has flowed is naught but a pure blood
And here it is, blended, the blood of adversaries,
Frozen on our cobblestones like a harder ice.

Lord, here is the blood of our sons flowing,
It has covered the whole torn nation.
When will we see spring forth, O late season
The desired harvest from all this shed blood? 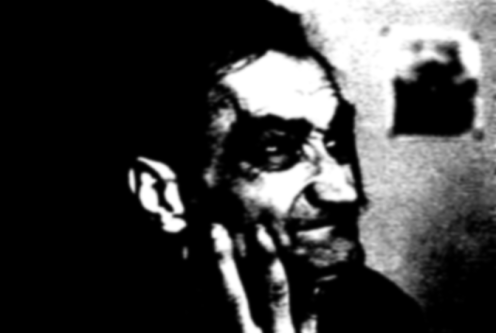 I zoom straight to the countryside
Boom! Again a * and I stab…

At full tilt in the valley
The Vodka swallowed
Heading for Valfunde
My underground homeland
Where the crazy ball opens
The lower depths and the cunts.
I can hear you spirits of the Night!
Go on Satan, take the wheel…

The All-high and All-powerful Famine
Arrives at the farm
With his pigs and his women…
It’s infamy.
Skeletor whips it out
Ready to squirt S.T.Ds
You’ll crap death’s heads
And all give up the ghost.
Folkfuck folly of alcoholics contaminated by AIDS!
Fire! The starting signal in your arsehole
The deathbed your last stop,
Jizzem rains down like a storm…

Empty I take my acoustic guitar to compose
A new P.N
So much hatred in my throat
My riffs reek of Hell
It starts again…

(by Tristan Corbière taken from These Jaundiced Loves, 1873)

Sands of old bones – The sea draws
Last gasps: its swell bursting, sound on sound…
To see the night through, the moon trawls
Pallid swamp, gulping fat worms down.

Calm of the plague, kiln of fever…
The damned will o’ the wisp is languishing.
Through fetid grass the lily-livered
Warlock of a hare is vanishing…

Of toads, small, melancholy
Succentors, with their bags of colic,
Poison the mushrooms, their stools.

After the debut album, Peste Noire was unvoluntarily confronted with the DSBM label. Famine responded to these accusations in the booklet of the next album:

‘PN, ‘Depressive’ Black Metal? Not simply that. I would rather say ‘Excremental’ Black Metal. Yes I expel phlegm and tears of distress. But I also expel as much piss, sperm and melodious farts begotten through JOY. No one hears the joy, the euphoria that also stimulates my riffs? Nobody smells where it comes from? The sadness, the wretchedness in PN, that’s what emanates from on HIGH, from the rational spirit, from my cerebral mind: the tears and complaints from meditations on human destiny. But ecstasy, she comes from the DEPTHS, from the bestial regions: the cock and the arse! My music made you high with its arsey stench, don’t deny it. Faeces, sources of knowledge and pleasure, were they not named in the Middle Ages the ‘joyous matters’? Don’t listen to my head, this traitor cries and moans, I must bury it: head down, the arse will be our heavenly firmament. Your life, spend it secluded in black forests, black enough to conceal the emptiness of existence from you. Embrace the arseholes as the mouth of God, for only there dwells God.’ (Diary of PN, I. 4)